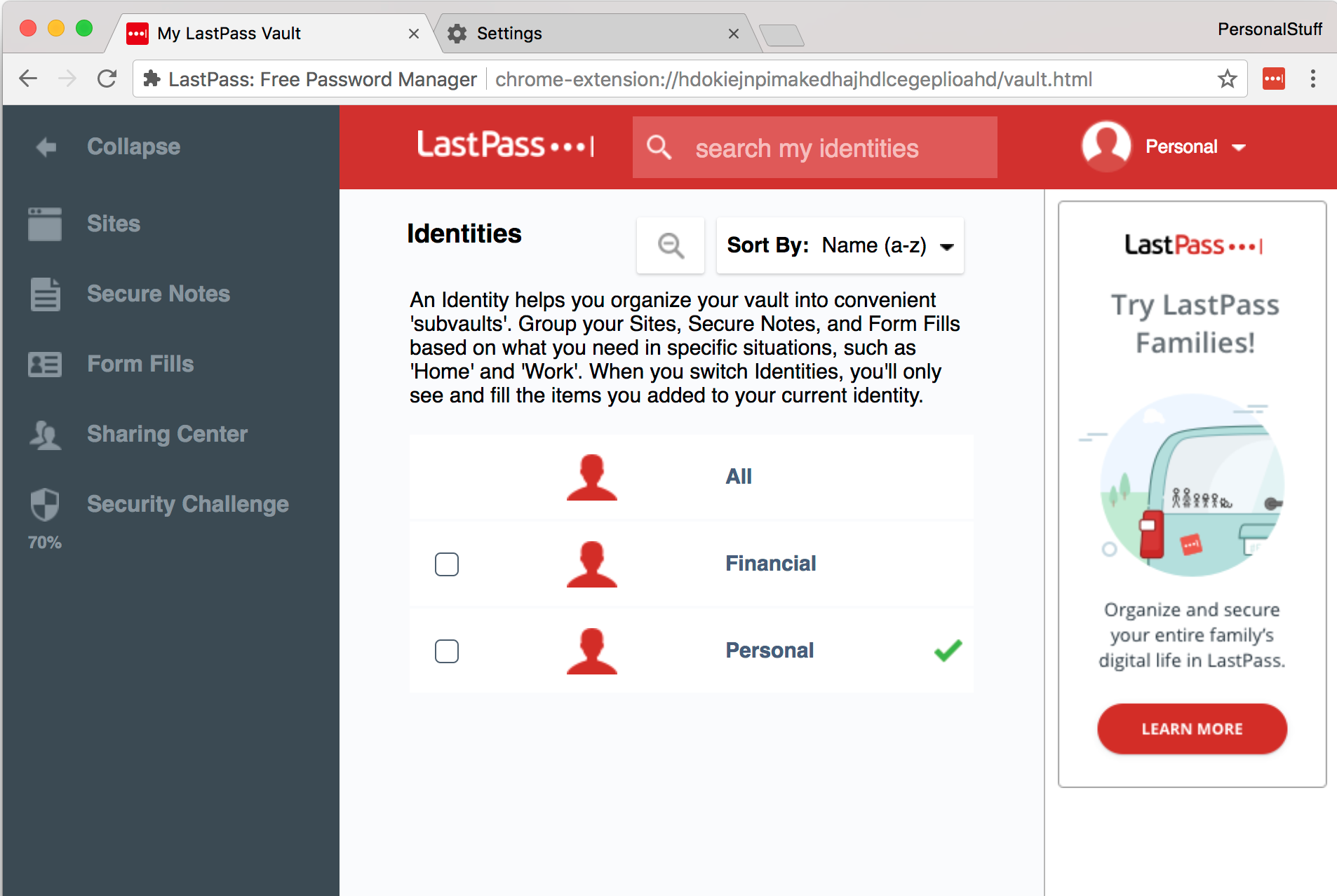 Using LastPass Identities with browser profiles (either Chrome People or Firefox profiles) can help keep online identities separate, and possibly safer in the event of a web attack.

It’s a security best practice to keep passwords in a password vault, so passwords can be long and (hopefully) uncrackable. Many of mine are in LastPass for its sheer convenience.

Using LastPass Identities, I can. It’s mostly seamless, with a few annoying bits, but awesome anyway. I haven’t found another article describing this, so am throwing it out there to encourage everyone to try something similar.

I’m showing this using Chrome People, cause I tend to use Chrome. But it works with Firefox profiles, or even using different browsers for different identities.

What are Chrome People?

It’s a way to have separate browser profiles, typically so two or more people can share a computer. Each has it’s own set of cookies, history, browser extensions, etc. Chrome browser security isolates these people, so even going to bad or insecure web pages should prevent a computer hack from spreading beyond that person. (Disclaimer: Chrome security is amazingly good, but not perfect.)

What are LastPass Identities?

A way for LastPass to store separate sets of passwords under one account. It’s nice if you want to pay for LastPass once and use it for multiple things.

Here are the instructions to use for each person. You can use the Chrome and LastPass links beside each step to get additional details.

Here’s what it looks like after you’re set up. The Chrome person matches the LastPass identity.

I’ve made folders in LassPass for each identity, then subfolders for organization. Moving passwords between identities has an awkward interface, and this helps.

Making one more profile that’s logged into all LastPass identities may be useful to help keep things organized.

You’ll have to login to Lastpass once for each person. With mutifactor turned on, trusting the computer, this means once every 30 days.

There’s no way to look at a password in LastPass and tell which identities it’s in. You have to go into each identity and move things around. Grouping the passwords in folders first helps.

Can I use Firefox profiles?

I love Firefox profiles, even though it’s rather a pain to use in practice

Use the Profile Manager to create and remove Firefox profiles

What about Firefox Multi-Account Containers

Looks interesting. Cookies are separated into “containers” but other things like addons aren’t. Haven’t tried it with LastPass yet.